Racism is not black or white. Racism lives in the in between too, like green. That’s right – green.

Environmental racism, which refers to the public policies and industry practices that disproportionately burden minority groups with environmental hazards, is one of the many forms of systemic racism that often go unnoticed or ignored by people in positions of power and influence.

Despite its distressingly low profile in many prominent facets of public life, environmental racism has impacted marginalized communities for centuries and will continue to do so unless serious attention and action is brought to the environmental justice movement.

What is environmental racism?

Environmental racism refers to the way in which minority neighborhoods (populated primarily by people of color and members of low socioeconomic status) are burdened with a disproportionate number of hazards like toxic waste facilities, garbage dumps, and other sources of pollution that lower quality of life. Rooted in racial discrimination regarding housing, land use, and zoning, environmental racism fuels the systemic segregation of minority communities.

Restricted by a lack of voice and political power, minority neighborhoods have become the target of mass marginalization and displacement. Environmental racism is yet another example of how discrimination and classism continue to determine who gets what, when, and how much.

Robert Bullard, a renowned sociologist also known as the father of environmental justice, found “race to be more important than socioeconomic status in predicting the location of the nation’s commercial hazardous waste facilities.”

What communities are affected by environmental racism?

A 2018 Environmental Protection Agency (EPA) report uncovered that over half of the nine million people living near hazardous waste sites are people of color. More specifically, the study found Blacks,Latinx, Asian/Pacific Islander, and Native American groups to be most exposed to hazardous waste facilities (within one km), bearing the onerous burden of environmental racism. 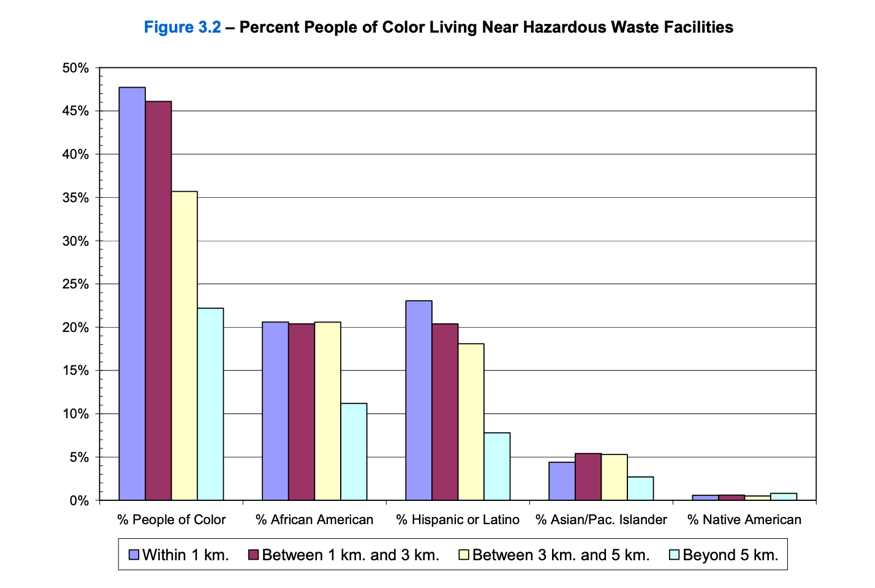 The majority of environmental issues facing people of color result from significant institutional barriers. For instance, with largely ineffective or non-existent sanitation infrastructure such as running water and sewage lines in highly populated areas, compounded by lack of political power to pressure all levels of government for just and equitable treatment, the physical state of minority communities quickly deteriorates.

American Indian land has also been heavily polluted. The Commission for Racial Justice found that nearly 50% of all American Indians live in areas with uncontrolled hazardous waste sites. It is no secret that Native Americans have historically suffered from institutional disenfranchisement. Forceful marginalization, however, continues to burden Native American communities to this day.

How does Environmental Racism Impact Income?

Undeniably, income levels correlate with environmental racism as well. However, income alone does not decide which communities experience higher pollution rates. According to sociologist Robert Bullard, “middle-income Blacks who make around $50,000 to $60,000 are more likely to live in neighborhoods that are more polluted than whites who make $10,000.”

This means that even when income is held constant, “race is still the most potent factor to predict where these facilities are located, more important than income or other socio-economic factors,” notes Bullard.

The most infamous and recent instance of environmental racism was the Flint Michigan Water Crisis. Environmental racism, however, does not begin or end with Flint – there are hundreds of Flints across the U.S.

In fact, these “sacrifice zones” are littered all throughout America: Louisiana’s Cancer Alley, southwest Detroit and its refineries, Philadelphia, Richmond (California), Wilmington (Delaware) – the list goes on. I’d encourage you to learn more about specific instances of environmental racism like these.

These are all communities of color surrounded by big industry that taints the air they must breathe and the water they must drink. This is poisoning millions of Americans. This is systemic racism.

How does Environmental Racism Impact Health?

The impacts of environmental racism are overwhelming. Studies have shown Black Americans to be three times more likely to die from exposure to air pollutants than white Americans.

As a result, people of color suffer from a disproportionate number of health-related issues. For example, lead poisoning affects between three and four million children, most of whom are Blacks and Latinos. Black children also experience elevated levels of asthma, cancer, and learning disabilities.

Climate change is yet another pressing concern for minority communities facing environmental racism. Native American communities in Alaska and the Pacific Northwest, for instance, have seen an unprecedented drop in their food supply due to rising temperatures that have depleted fish and wildlife, forcing many of these groups to relocate entire villages due to thawing permafrost caused by global warming.

Now, minority communities are facing increased threat from COVID-19, which has disproportionately affected Black Americans, with mortality rates 2.3 times as high as the rate for whites and Asians according to a June 2020 APM Research study. If minority groups in the U.S. had died of COVID-19 at the same rate as white Americans, the deaths of at least 14,400 Black Americans, 1,200 Latino Americans and 200 Indigenous Americans would have been averted.

Increased exposure to toxins makes marginalized groups much more vulnerable to public health threats like the coronavirus. Exposure to high levels of lead and air pollution puts communities of color at a greater risk for compromised immune systems and illnesses such as asthma, diabetes, and lung disease – all known risk factors for COVID-19.

Moreover, with inferior access to proper healthcare and other components of the social fabric (like child care), minority groups are often unable to mitigate the threats that they disproportionately face.

Globally, the color of your skin significantly influences your exposure to many of our world’s worst ills. This is environmental racism at work.

The Fight for Environmental Justice

“Three words connect it all: I can’t breathe,” Rev. Michael Malcom, executive director of Alabama Interfaith Power and Light, said. “Whether it’s the pressure we’ve felt through policy or the violence we face from people who are supposed to protect and serve us or the brutality we face from pollution, it has always been, ‘I can’t breathe.'”

Now more than ever, there is a sense of clarity in our society that grassroots involvement is necessary to enact change. Time and time again, we have seen two main problems at the state and federal level: Not In My Term of Office (NIMTOF) and Not In My Election Year (NIMBY) syndromes. Though a state may be dedicated to ameliorating the disparate burden of hazardous waste facilities, politicians will continue to prioritize their reelection and their legacy over the well-being of their constituents. This mindset will not eradicate systemic racism.

Instead, communities must demand state and federal accountability and mobilize from the ground up to raise the political capital of neighboring minority communities. This is largely the reasoning behind the Environmental Justice Movement, pioneered by sociologist Robert Bullard.

The Environmental Justice Movement advocates for healthy, sustainable, and livable communities, ensuring that tax dollars are spent on the needy rather than the greedy.

A list of the 17 principles of Environmental Justice can be found here.

These can be uncomfortable observations and conversations. But progress requires discomfort and pain. In our collective fight for a more just, equitable, healthy, and sustainable planet, we must highlight the barriers that inhibit our ability to create the world we all deserve.

US doesn’t need Paris agreement to play ball on climate
It's a pledge, not a policy.

The scoop: Biden vowed to sign the Paris agreement in his first day in office. As an environmentalist, I think it's all hype no action.

Why Paris no bien:

How do we stop the single-use plastic craze?

How do we stop the single-use plastic craze during a pandemic? What does a post-pandemic world look like for plastic?

What to know More people are buying single-use plastic since the pandemic started.

Why it matters It took decades for sustainability to gain serious traction, and a matter of weeks to destroy some real progress on the way we live. People are buying delivery, shopping online, and throwing single-use items away more than ever before. That means a lot of waste to be managed in the coming years. We need to reconsider how we evaluate short term versus long term risk.

Big picture Yes, PPE is important. Yes, oil is cheap. And for now, it makes good business sense to produce plastic because it is cheaper. Yes, I know your business may be struggling and you need to save every dollar possible to make ends meet.

But, if you are in any way, shape or form invested in the long-term well-being of this planet and/or your business, you must take a deeper look at our business models, processes, and impacts to determine whether it is hurting or helping the big blue-green planet and its constituents.

Everyone deserves to have the wedding day of their dreams, but that doesn’t need to come at the cost of the environment. Let’s find out how to create a sustainable wedding.

Less is more when you buy green this summer

If you’re a socially conscious adult, you may have experienced trouble navigating the jungle of brands and product offerings that is the eco-friendly space.

Big picture: Shopping dominates modern culture, yet it also advances many issues like messy supply chains or the abundance of plastic waste in the ocean.

Between the lines: Buying green or purchasing eco-friendly products creates a ‘warm glow’ in consumers. It generates satisfaction, like the feeling from helping others.

For the people: Buy green or Buy less? Short answer — do both

During the past year, I noticed the rise of online shopping more than ever. One day I woke up and my parents were using Amazon as much as my younger sister. I realized even socially-conscious consumers couldn't resist the convenience of big online retailers.

Then, one night on my way home from band practice I got stuck behind a garbage truck on my block. Almost every recycling item was contained in an Amazon box.

The next day, I set out to create a sustainable shop for reusables and consumables.

‘Plogging’ will change the way you exercise…

What are you talking about? Plogging. AKA jogging while picking up litter. Yes, you can exercise and help the environment AT THE SAME TIME.

Five Ways to Make Yourself Disaster-Proof
Don't wait for the next pandemic to invest in yourself.

The scoop: Don't wait for the next big world event to prepare yourself. How can you make you and your family more 'disaster-proof'?

These goals are not perfect for everyone. BUT at least one or two is a tangible goal you can strive for. Set quantitative targets with time intervals.

Humans are only as sustainable as our ability to survive in harmony with nature. Invest in your survivability.

The scoop In the world of factory farming, public health risks are completely ignored.

Could applying “social distancing” rules to animals really help us all live healthier and safer lives?

Why it matters Most animals (both wild or domestic) carry some type of virus. It’s easy enough to learn from the recent outbreak and stay away from wildlife. But what about domesticated animals in factory farms? Farm animals carry many diseases.

As the world population increases, so does the demand for meat products. More meat = more crowded spaces in factory farms.

Bottom line Removing factory farming, or significantly improving its operations, is a contributing factor in preventing another public health disaster.

9 air purifying indoor plants to spruce up your home

A deep dive into Lola Tillyaeva (Till)’s ‘The Harmonist’, sustainability in beauty

Read Smart, Save Time.
Pick all the topics you are interested in to fill your homepage with stories you'll love.
Earth Week

Become an Eco-Warrior.
Registration is closed.